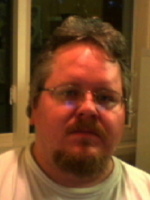 Apparently my beard is famous!

Instead of having a bunch of content on this page, I've decided to use this "index page" as an actual index of the content which is available here, or which may be available in other places and I think it's worth mentioning here.

In January 2014 I had to migrate my web sites to a new server. At the same time, I have made all of the ".jms1.net" web sites only work when viewed using HTTPS.

I am proud to tell people that my brother is serving in the US Army. He has done three deployments (each a year long or longer) to Iraq, as a helicopter crew chief with a "medevac" company, and has since transferred to another unit.

I am also proud to display the Service Flag on my web site, on my car, and in the front window of my home.

In addition, I have prepared a set of flag graphics like the one you see here, which may be used on any web site or other publication to show pride for your family members in the service.

And for anybody with a chip on their shoulder like this idiot, let me make it very clear that I support MY BROTHER, and I respect him for doing the best job he can in a difficult situation, although I don't believe that the USA has any legitimate reason to be in Iraq in the first place. I honestly believe that the whole "war in Iraq" is nothing but an excuse for the oil companies to take the Iraqi oil, as well as the contracts to rebuild the infrastructure (wells, refineries, pipelines, etc.) which we destroyed in the first place. Do you really think it's just a coincidence that the current President and Vice President just happen to be "oil men" themselves?

It's also a way for the Federal Reserve (a privately owned bank which exists only to loan money to the US Treasury) to force Congress to borrow more and more money to pay for this so-called war (no, not "war", let's call it what it really is- the invasion and subsequent occupation of Iraq.) Think about it, where do you think the billions of dollars they keep spending on the "war" every day are coming from? Taxes haven't gone up by much, so seriously- where are they getting the money? Answer: they're borrowing it from the Fed, and expecting our children, grandchildren and great-grandchildren to pay it back thirty years from now. This is the model used by every "central bank" on the planet, all modeled after the Bank of England.

At the risk of using a "Forrest Gump" cliché, That's all I have to say about that. Please don't email me to argue about this, or to say anything about my brother for doing his duty and following orders... it's getting really old. If you truly believe you know better than me, then DO SOMETHING about it. Contact your elected officials and work through them to stop the madness. Or maybe join the Army yourself- THEN you might have some idea what my brother is going through, and MAYBE you'll have some credibility with me... but arguing with me isn't going to change anything.